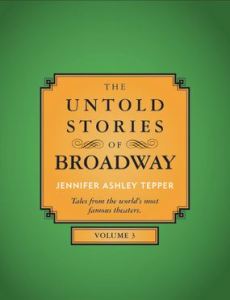 I was very surprised by the print quality of this enormous book, so surprised, in fact, that I looked up the previous two versions online to see if perhaps I was holding a galley copy and not the final version. No, volumes one and two were very similar in their cover design, their page formatting, and other features. This book is so fun and comes written by someone with unparalleled expertise in the topic, but I wish there had been a lot more effort put into making it look like a professionally crafted book.

Having said that, there are some considerations as to why it might be such an uncharacteristically strange-looking book. First, a portion of the proceeds go to support the Broadway Green Alliance, a non-profit that works to ensure that NYC productions are as environmentally-friendly as possible. The more money the publisher spent on making this into a more industry-standard book, the less money there would be to support the organization.

But the other consideration is this: when you have as much access to insider knowledge of the theater scene as author Jennifer Ashley Tepper, it doesn’t matter what the finished product looks like, even if it isn’t all that polished. You would think any of the Big Five publishers would be clamoring to get their hands on the manuscripts that led to these three books, but then the resulting publication would be so outrageously expensive that only the stars who grace the pages could even afford it. At just around $20 each, these oversized volumes share snippet-like anecdotes of life inside the biggest name theaters, and featuring the antics and tales of the biggest name stars.

For too many theater lovers, even a Broadway matinee is out of the realm of possibility. They instead rely on insider views to get to know their favorite stars and the iconic performances that grace the stage. With over 300 pages of interviews, memories, inside jokes, pranks, and more, this is the gift to get the theaterphile in your life.