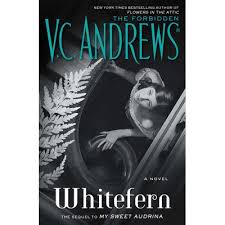 I’ll admit, I LOVED My Sweet Audrina when I first read it years ago (probably at a younger age than I should have). It was dark and twisted but still endearing in its own way, and it carried the story along through believable–and a few semi-believable–characters that did completely bizarre things.

So imagine my complete and total shock-filled joy to discover that there was a sequel!

Whitefern picks up with the death of Audrina’s father and shortly after, the reading of his will. The first book’s happily ever after romance between Audrina and Arden has become just as dark and twisted as the original story, and Arden loses his mind over the will when Audrina is named the major shareholder in her father’s company. “Sweet” Audrina has had no interest in her father’s business, but now that she’s been put in charge for some unknown reason, she’s curious as to why her father made that decision…and what he knew about Arden that would leave him out.

Then of course, there’s Audrina’s sister, Sylvia. The plot takes on a fresh form of evil where the younger sister–all grown up–is concerned, and Audrina is once again ensnared in a “face saving” scheme to protect the family name.

My only complaint with the book may stem from my having aged and matured, and not through the writer’s storytelling ability, but I just never felt the believability factor that I felt when reading the original. It was entertaining, but I always felt like I was on the outside looking in, and never really absorbed by the story and its outcome. Again, that could just be the thirty-year age difference between the teen who read My Sweet Audrina and the adult who enjoyed Whitefern.