← A Million Ways to Die in the West by Seth MacFarlane
Review: you Show Me Yours by Larry Grobel → 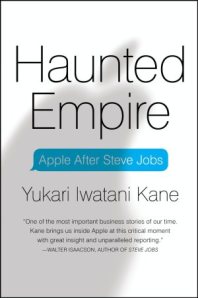 I expected a lot from Haunted Empire, and I did get a lot of information. It just wasn’t the stuff I thought I would read about. Where was the controversy? Where was the speculation about Apple’s downfall? Basically, where was the information that CEO Tim Cook took issue with?

There was a lot of background information, and I will say that the beginning of the book contained an even closer look at Steve Jobs. It’s funny to read a book that contains information on how Jobs fought with the guy writing his book! There was a lot of really in-depth and thrilling–both heartwarming and negative–information on who Jobs was, told only through the most hidden conversations that made me ask several times, “How did the author find this out?” That’s not to question Kane’s veracity, but to really highlight that she included conversations no one else would have known about.

But while the content within the book gave detailed information about Apple’s woes since the untimely passing of Jobs–I’m not above admitting that I cried several times during Kane’s depiction of the CEO’s last few months and final death–there was nothing of note about where the company is headed with Cook at the helm, at least not in terms of the uproar that followed the book’s publication. Yes, there is certainly mention that Apple hasn’t released anything profound since losing its original dreamer, but it’s also understandable. Kane even paints a picture of a company that is still reinventing itself as a new company, having gone through downturns in the past with various underwhelming CEOs.

At the same time, Kane herself gives so much insight into not only the legal woes that have plagued Apple lately (and kept the company fairly busy with its leadership and its finances tied up in courtroom drama), but also unintentionally details the cyclical nature of Apple’s innovations. It’s hardly newsworthy that the company that brought us the iPhone, iPod, iPad, and resulting app and music stores in the space of such a short time frame would rest on its laurels for a moment before attempting to launch anything quite as world changing again.

Haunted Empire was insightful and interesting, but hardly earned its reputation as the tell-all, “bearer of bad tidings” book that the hype told us to expect.

← A Million Ways to Die in the West by Seth MacFarlane
Review: you Show Me Yours by Larry Grobel →